Rolling on with the punches, we're following up from the releases of BLVK N' Yellow and BLVK Fusion with our NEWEST collection, Ello!  Ello is a disposable vape device that features an all-new device design that spells nothing short of perfection in delivering a pleasurable vaping experience.  BLVK being an award-winning e-liquid brand that specializes in creating complex flavor profiles for the ever-changing landscape of open-system e-liquids decided it's time to shake up the industry once again with Ello!

Unlike other disposable vape device brands that exist entirely as a disposable, BLVK has the full power of its nine collections behind this new disposable collection.  This gives you the peace of mind that Ello is not a cash grab, but more so, to provide you as the vaper with exceptional vaping products that will last, deliver your nicotine, and most importantly, provide a true value to all adult smokers looking to make the switch from the traditional analog cigarettes.

HOW DOES ELLO STACK UP AGAINST THE OTHERS 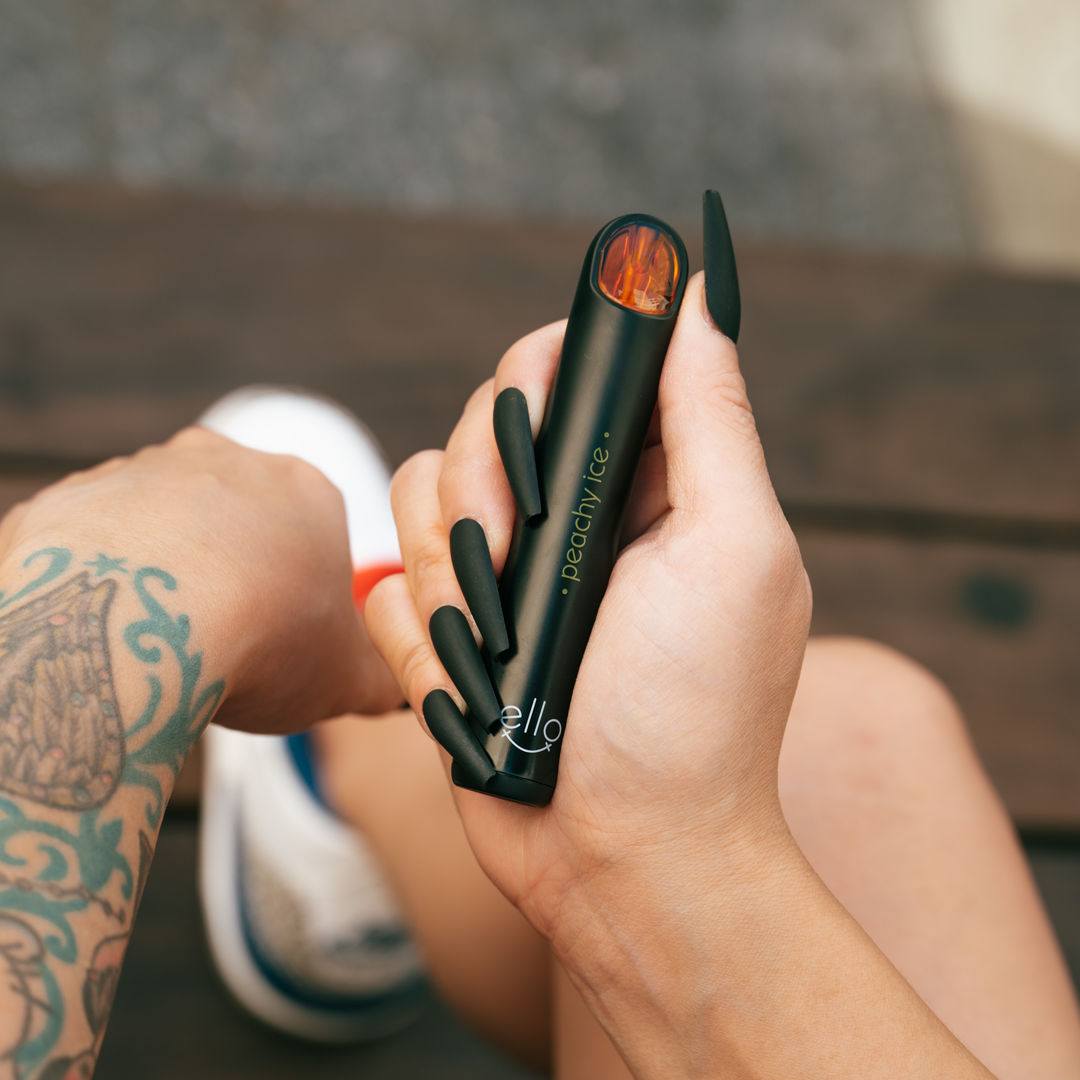 Ello, being a disposable vape device needs to stand apart from what's already in the market.  Disposable device brands such as Flume, Puff Bars, and Bang all have their respective pro's and con's.  Namely being, all three of these brands have delicious flavors but their devices are fairly hit or miss.  Sometimes the flavors don't taste right, or the food, fruit, or candy it's trying to mimic is missing something.  Other times, the device itself doesn't hit well.  Maybe there's too much airflow, thus degrading the flavor.  Maybe the device's airflow is too restricted, leaving you to truly work for the puff.  Or maybe the device and the flavors are on point but it simply doesn't last as long as its advertised amount.  All of these points are where Ello shines!

Ello, also being a disposable vape device delivers the ultimate convenience.  Each device is pre-filled with 7mL of e-liquid, amounting to up to 2500 puffs per device before needing to dispose of it.

The airflow of the device is also worth noting.  After several months of R&D, consisting of the entire company and its R&D partners, we were able to truly nail down what constitutes the perfect puff.  Something that isn't too airy or restricted.  Remember, at the end of the day, we're looking for an exceptional flavor that's matched with exceptional airflow control.

In terms of overall design, most disposables take on some unintuitive shapes and sizes.  For example, a Puff Bar looks a lot like a JUUL.  It's small, discreet, and doesn't possess enough puffs to get someone through the day.  Then there are brands such as Flume, taking on a bulky design that isn't as space-friendly and generally possesses more puffs at the expense of its size.  The design of Ello is a happy medium between the two.  Taking 7mL of e-liquid and fitting it into a sleek and convenient size that can fit just about anywhere!

Since BLVK is an award-winning e-liquid brand, we wanted Ello to truly shake up the industry with not just brilliant product design, but to have the flavors speak for themselves!  This is why instead of taking our tried-and-true flavors that exist within our open systems e-liquids, we wanted to craft up something entirely new for those that already love disposables!  Generally speaking, those that opt for disposables are looking for convenience, so we simplified our flavors but made sure to not overly simplify then.  The result is ten entirely new flavors to the BLVK family, each taking on a new taste preference for the vaper and ultimately providing that value. 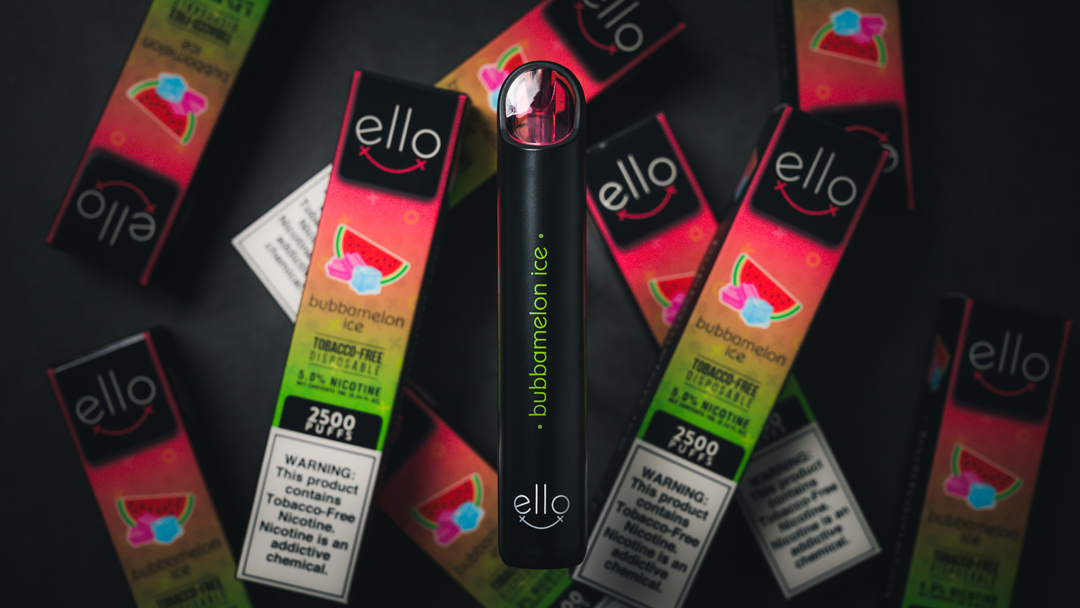 Juicy watermelon chunks infused into bubblegum with a cool finish. 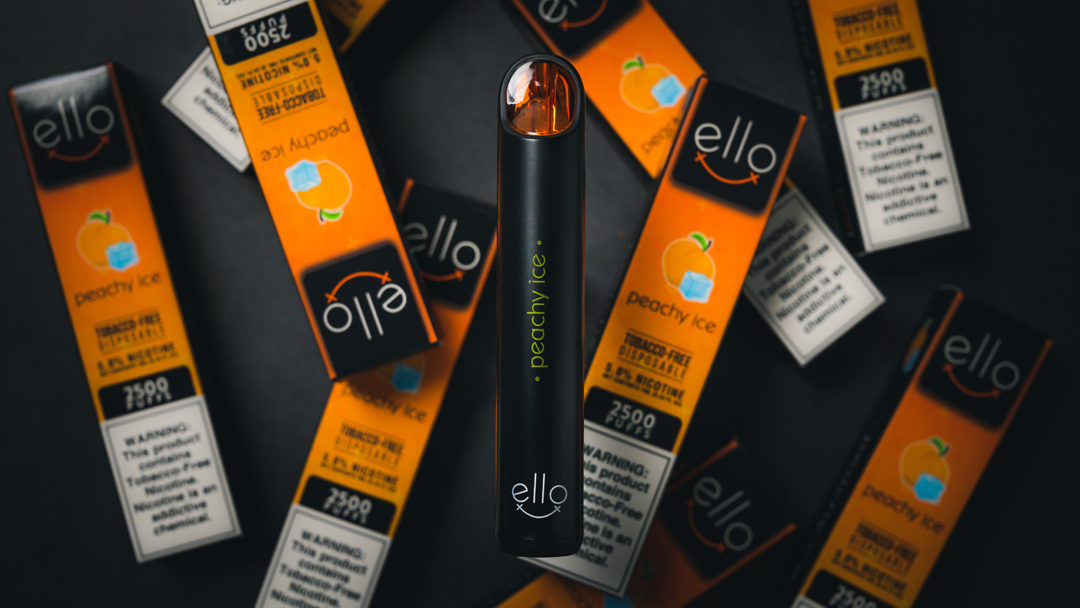 Plump peaches infused into soft and chewy gummies, finished with a refreshing hit of ice. 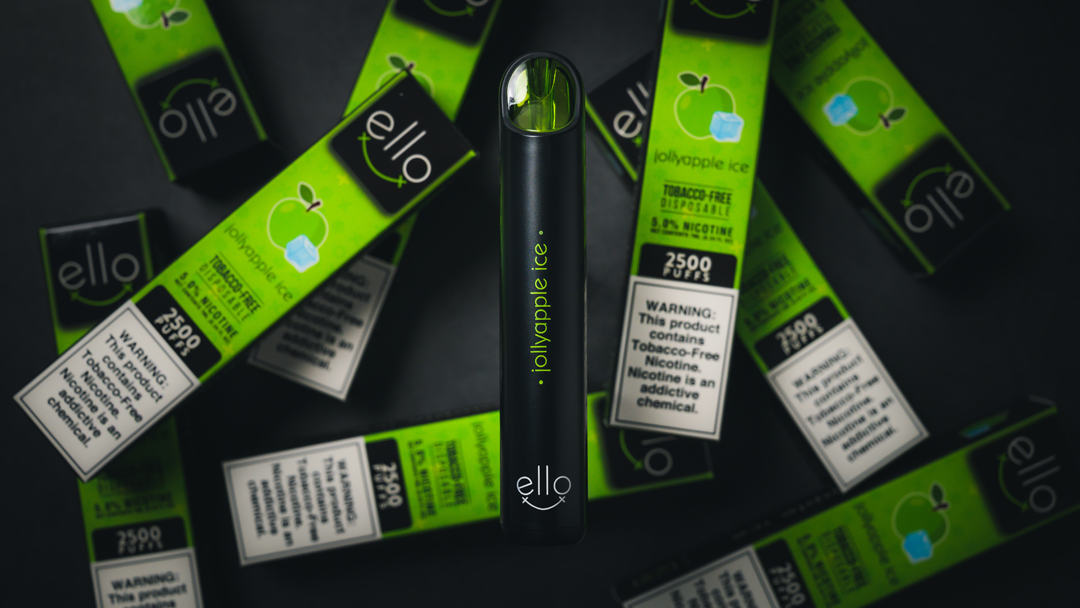 Your favorite sweet, and tart green apple candy with an icy twist! 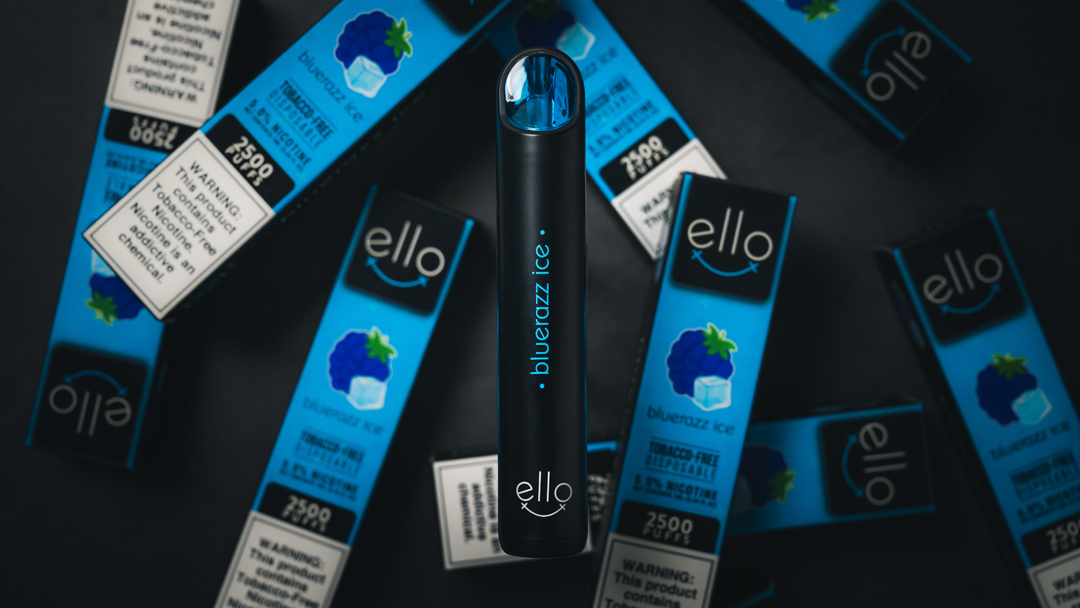 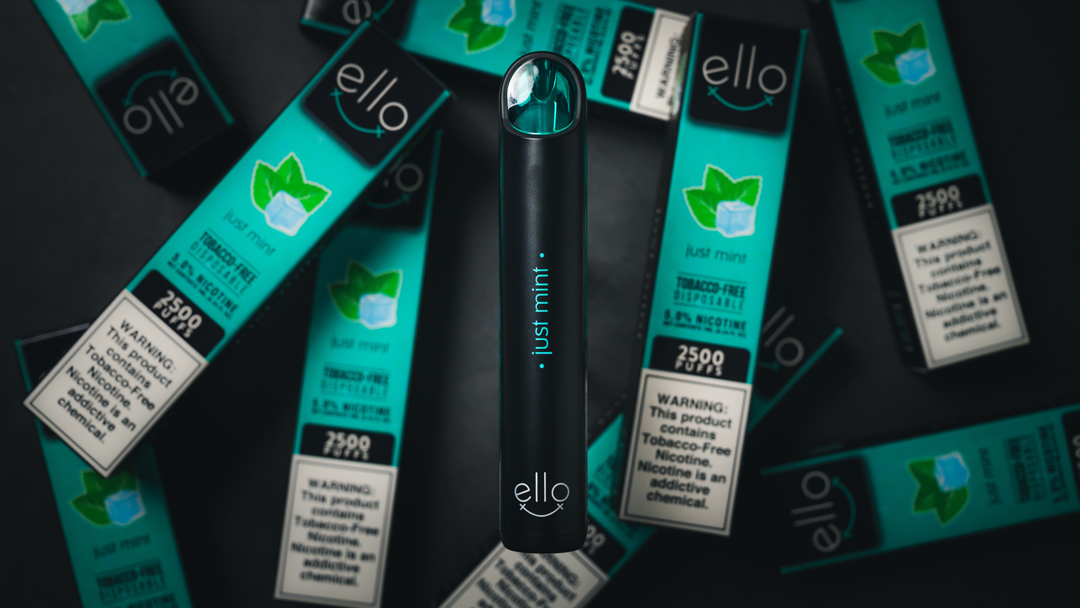 Just like the name states, nothing but sweet minty notes for one cool vaping experience. 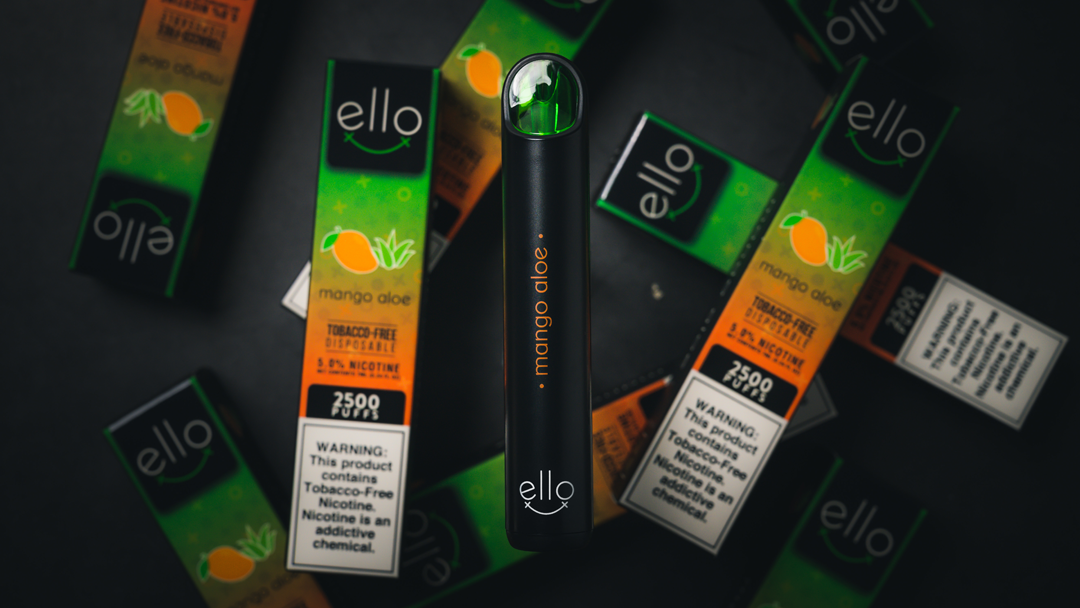 Sweet and creamy mango notes finished with a heavy-handed jolt of aloe vera. 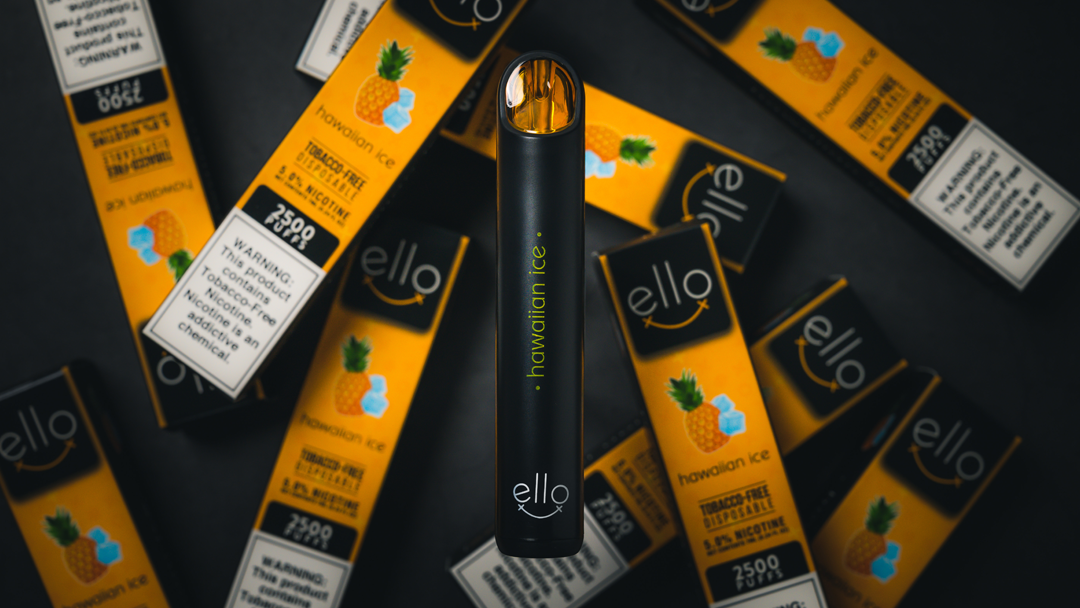 Indulge your tropical vibes with this blend of pineapples and sweet menthol ice. 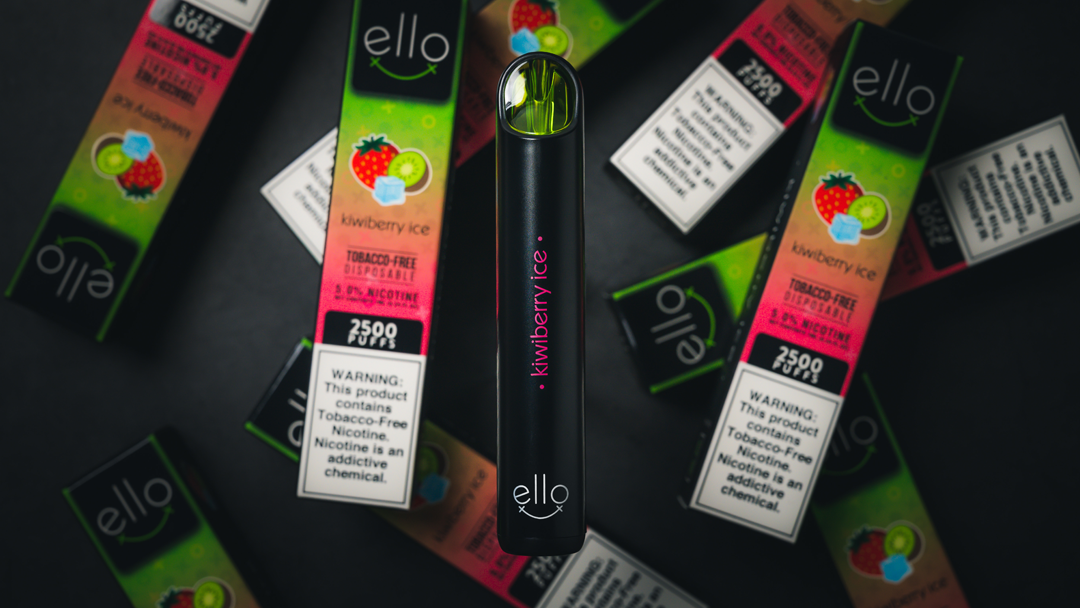 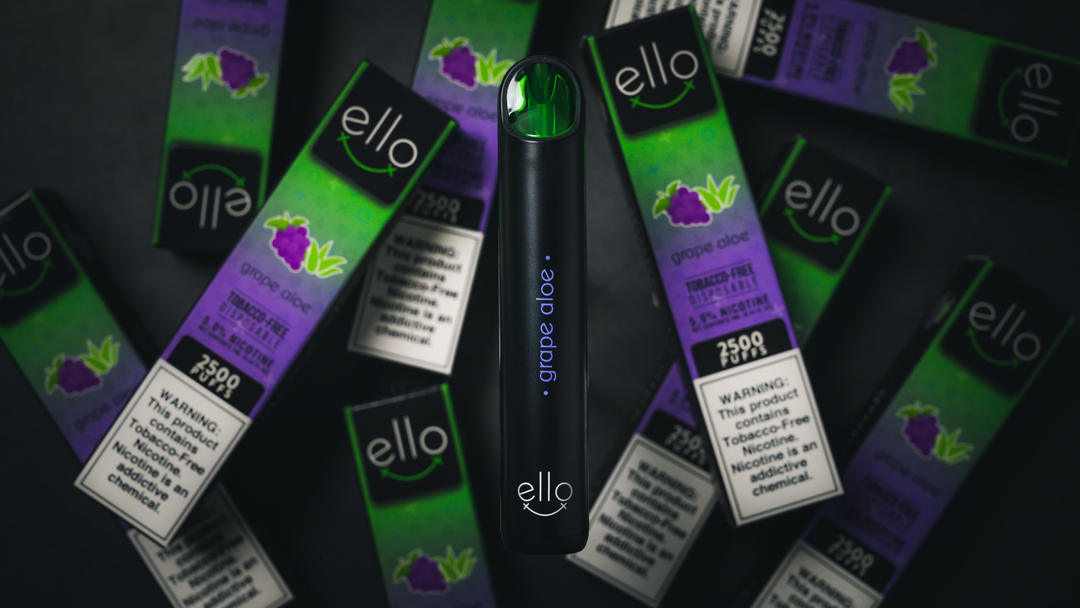 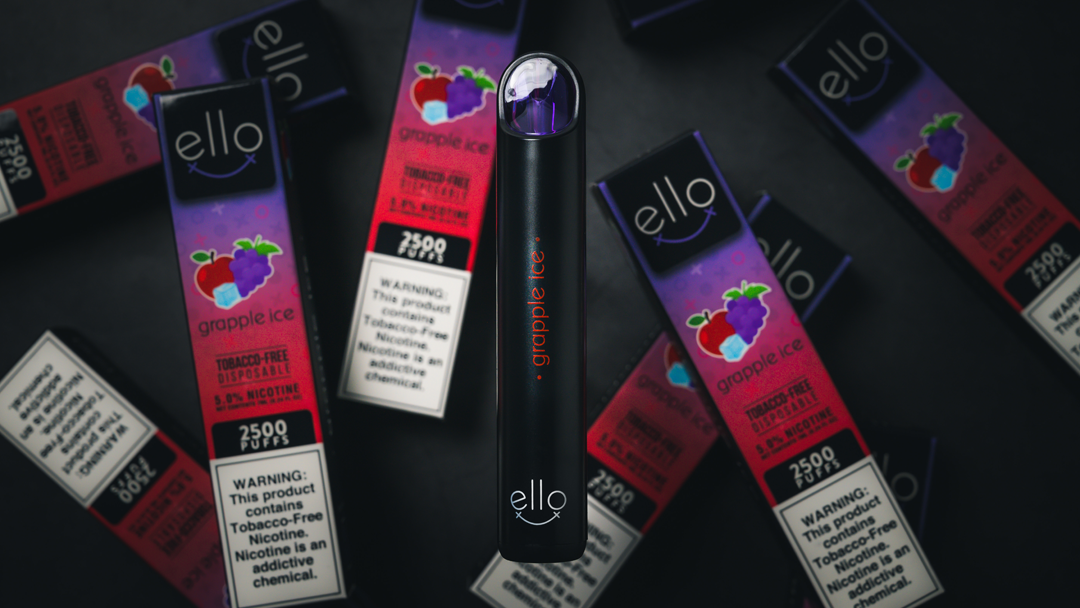 THE BEST PART OF ALL OF THIS?!

The best part of Ello is this: all ten flavors possess 5.0% tobacco-free nicotine.  Similar to the BLVK N' Yellow and BLVK Fusions collections, we're making the switch from traditional tobacco-derived nicotine and opting instead for tobacco-free nicotine!  For those that are unaware of what tobacco-free nicotine is, its synthetic nicotine in that the compound does not have a taste or smell, which only helps to accentuate the flavoring contained in each Ello device.

Ello is available now, directly off our partner retailer's website, Element Vape.  You can also walk into your local vape or smoke shop and ask for an Ello!  We hope you enjoy the device and our flavors!  Be sure to follow us on social media for more new things coming to the BLVK family!