Why Do Adult Smokers Prefer Sweet E-Liquid Blends Over Tobacco Ones?

With the FDA looking to announce its regulations that will ultimately decide the fate of the vaping industry in what feels like a timed, ticking bomb, the typical consumer and manufacturers alike do have a shimmer of hope.  New research shows that regular vapers who have completely kicked the habit or have at least reduced the habit of smoking analog cigarettes prefer non-tobacco blends and would instead opt for sweet flavors, such as BLVK Unicorn.

Researchers at the Centre for Substance Use Research (CSUR) uses 2016 survey data from over 20,000 habitual vapers to show patterns of flavor preference among American vapers.  Dr. Christopher Russell, who has led several studies on consumer freedom with vaping leads this study.  Researchers of the study sent survey invitations to members of the four main consumer and trade vaping organizations such as Consumer Advocates for Smoke-Free Alternatives Association (CASAA), Smoke-Free Alternatives Trade Association (SFATA), the American Vaping Association (AVA), and Not Blowing Smoke (NBS).  The study was also open via social media and in forums such as Electronic Cigarette Forum (ECF) and Planet of the Vapes, two of the most popular online forums.  By the end of the drawing phase, the study concluded with 20,836 usable surveys.

The goal of the study is to survey full-time vapers who have successfully quit smoking while effectively replacing the habit of using analog cigarettes with that of vaping products.  By surveying flavor preferences, one may deduce strategies that can help others to make the switch completely to vaping.  In addition to providing manufacturers with an effective base for targeting their customer demographic, consumers can also use the study as support in the comments section of the FDA's ANPRM.

The largest demographic clocking in at 75.9% are the "switchers" - regular smokers that completely quit cigarettes and were and most likely still are frequent vapers.

The next largest demographic of survey users are classified as "former-smoke e-cigarette users".  This 11.9% group are vapers who had already quit smoking cigarettes and adopted vaping at a later time.

Unlike the general population of people who use e-cigarettes, only about 7% of the survey participants were "dual users".  This group consisted of those that used both cigarettes and vapes concurrently.  To note, the majority of vapers that responded to this group classification is not an indicative representation of vapers at large, since most still smoke cigarettes.

While the use of pod systems, both open and closed, have gained vast popularity over the years (mainly through JUUL, PHIX, and other devices), it is worth noting that since the data was based in 2016, this demographic has been omitted.  Reason being that the popularity of these devices only became incredibly popular in 2017 and 2018.

What flavors do full-time vapers prefer?

According to the study, full-time vapers in 2016 most likely started making the switch 3-5 years earlier.  During that time, most of the availability of flavor variety still lied with tobacco blends as the majority.  By 2013 however, researchers stated that "fruit-flavored e-liquids have replaced tobacco-flavored e-liquids as the most popular flavors with which participants had initiated e-cigarette use...[and] the proportion of first e-cigarette purchases that were dessert/pasty-flavored had also increased consistently, from being ranked fifth most common first flavor prior to 2011 to being ranked third in the past 12 month."

Among those that initiated e-cig use with fruit flavors, the never-smoking group had the highest numbers; which makes perfect sense, since as time passes and vaping becomes a more established and popular practice, more people will begin nicotine use with vaping rather than smoking.

Measuring currently used flavors, the categories were: fruit/fruit beverage, dessert/pastry, and candy/chocolate/sweets that were among the most popular flavor demographic among all groups of vapers.  Among the switchers category - just 14.8% preferred tobacco flavors and 14.3% preferred menthol/mint.  About 40% of all vapers mixed two or more flavors. 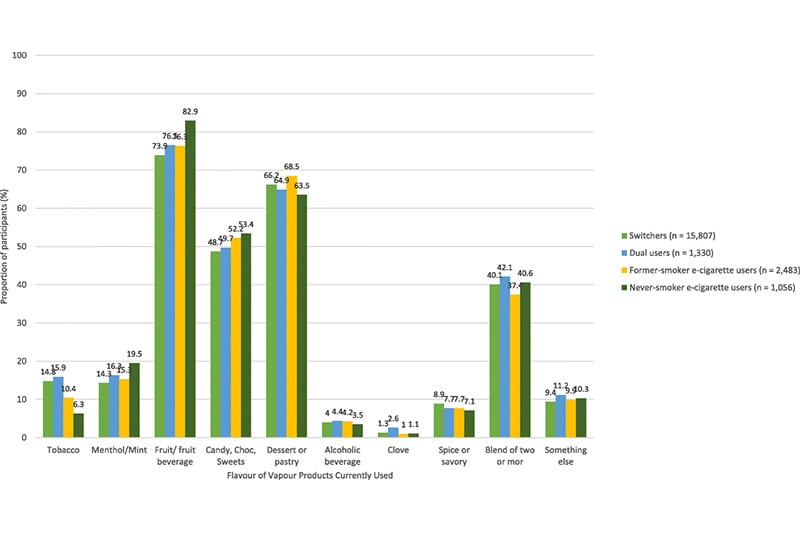 As for dual users, just 15.9% of that group preferred tobacco blends and 16.3% chose mnthol/mint vapes as their go-to flavor preference.

To add to the point above, it was common practice for retail stores to educate former and current smokers looking to make the switch to vaping.  One of the several points a retail store would tell these people is that when choosing the first flavor to vape, one should try to compliment the taste of the tobacco they used to smoke.  More than likely, the average cigarette smoker used to smoke a red.  This standard tobacco blend would be complimented greatly by a dessert/custard flavor.

The point here is that for those that are actively leaving cigarettes, one would come to prefer flavors that don't remind one of smoking.  On a more physiological side, as taste buds begin to heal and begin working properly again, one may enjoy bright, sweet flavors as a stark contrast to the harsh flavors tobacco blends often bring.

What does this mean for the FDA?

It's a no-brainer that the FDA has taken a stance to completely pigeon-hole the vaping industry, particularly around e-liquid manufacturers whose typical demographic does lie with those that prefer sweet blends over tobacco and menthol ones.  In the eyes of the FDA and its advanced notice of proposed rule-making on flavors, these sweet flavors are especially appealing to kids and promote youth initiation.

As vapers both represented and not represented through this survey might otherwise suggest, our flavor preferences will obviously have ramifications towards groups of people that should not otherwise be engaging in the use of vaping products in the first place.

It is OUR JOB and OUR DUTY to inform and educate in order to protect our interests.  For many, vaping is not just a method in which to consume nicotine safely, but rather, a way of life.  The FDA and other regulatory groups look to eradicate it.  Do what you can and always remember to vape on!